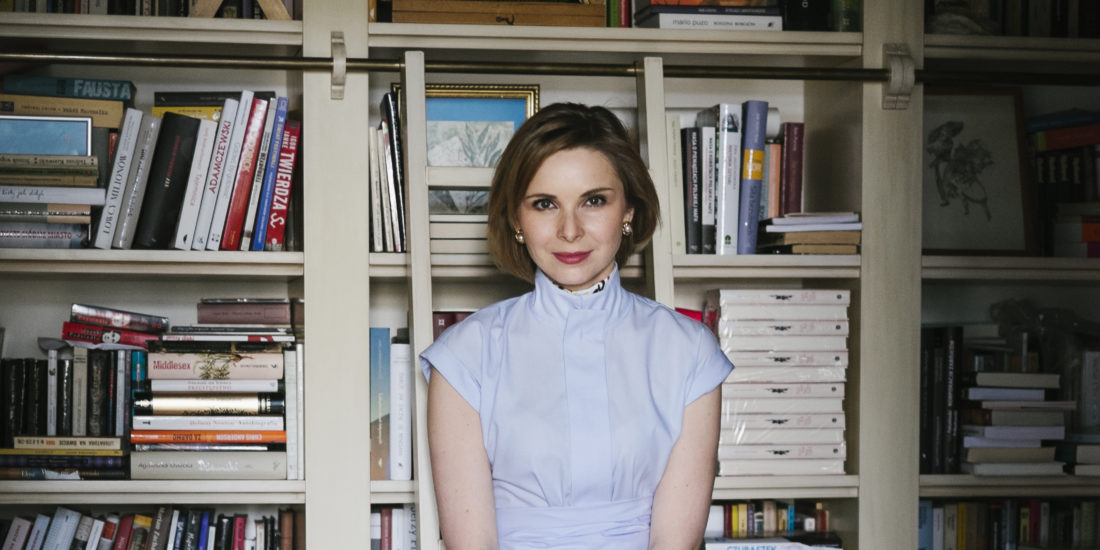 Where did your interest in books come from?

I learned to read very quickly as a child. I owe that above all to my mother. She decided, after the birth of my younger brother, to stay at home and devote all her attention to us. My father wasn’t really around. He travelled a lot because of his job – he was a journalist at the time. It was surely a very intense time for my mother, but despite all of the logistical challenges she made sure to read to us often. I associate my first encounters with books with safety and closeness – something very personal. I quickly began leafing through books by myself (which was good for my mother because it meant she had more time to herself). Everyone read a lot in our family. My grandparents had a great library, which I could use. My father was never really without a book, but if he did happen to lack something to read he would study leaflets and instruction manuals. Developing an interest in books depends greatly on the examples set by those closest to you. I had such examples by the dozen. With time I became known as a bookworm. There was only one answer for the question: “what is Ania doing?” “Ania is reading.”

Did you dream of becoming a writer?

Not at all! It seems obvious to me now that I work with books, but my road to being an author was long and winding. I was interested in many things, but it turned out that nothing gives me as much pleasure. Apart from books, music plays an important role in my life. I wanted very much to attend a music school, but my father – who knew from experience what that involved – decided to spare me the many hours of practice. So I learned to read music and to play the guitar by myself, because I was always very determined. When I started playing in a band, I realised that my talents were not sufficient to be a professional musician. Of course, playing in a rock band you can be a dilettante of the “three chords and lots of shouting” variety, but I wanted something more. I worked as a journalist at various newspapers, on the radio, and television. But throughout that time literature was very close to me.

Some time passed before you knew what you wanted to do with life.

I have the impression that, for our generation, the extended process of maturing, and discovering yourself, is a natural progression. Often it is only around the age of thirty that we are able to define what is truly important to us. Of course, we live in relatively peaceful times – given our history – and we can allow ourselves this period of “discovery”. My parents were also always enormously supportive, at every stage of my development. I tried to not exploit that too much, of course, and I quickly became financially independent. Although I still have a reflex to turn to my parents when I’m in doubt, and I don’t see that at as a sign of immaturity. I simply know that I am from somewhere and I can always go back there, regardless of what foolish thing I might have done. The feeling that I always have a soft landing meant that I did not fear risk or taking various, often difficult decisions, like leaving my home town, which ultimately led me to “professional reading” – or reading for money (laughs) – and then to writing.

Yes. I decided to move to Warsaw and soon found a job at Lampa, a literary journal. I did a lot of things there, among them writing my first reviews. I suddenly felt that I was in my element. It was an environment in which I wanted to operate, and people with whom I wanted to be in contact. Twelve years have passed since then and that feeling continues unabated.

I started with writing about the work of others, and it seemed likely to remain that way, because I was surrounded by very talented people, who wrote excellent, interesting things. That intimidated me, even discouraged me, from making my own attempts at writing. From time to time I would write something, put it in my drawer, and expect it to stay there. Very few people knew about that, because I did not like to talk about it. The most difficult thing for me was to admit to my friend (also an author) that I was writing, and in the end I did so only once I had a book finished and someone, to whom I had dared show my secret drawer, was willing to publish it!

Were you afraid of competiveness?

I was afraid that something would change irrevocably. Up to that point my friend had been the author, and I was the “lady of books” who could offer advice or constructive criticism. There are many things that you need to overcome in yourself to “come out” as a writer. Primarily the enormous uncertainty as to your abilities, and a dose of low self-esteem. Writing is a wonderful pastime, but it is also terribly frustrating. With time – it took me a good few years – you learn to accept criticism and gain distance.

What role do readers play in an author’s self-appreciation?

I have the impression that in Poland, unfortunately, that role is unnaturally diminished. I recently organised an evening with an author friend of mine, who wrote a book that happens to be very popular at the moment. The book addresses the difficult problem of alcoholism, and it had an amazing reception. People found something important for themselves in it. Nevertheless, the author feels that she isn’t a “real” writer, because she has not received the symbolic “stamp of quality” from the Polish Writers Association. Being a writer in Poland means receiving awards and being acclaimed by critics – the applause of the scene, in other words. Readers are often at the tail end of that. My friend raised the point at the meeting, and one of those present asked her a serious question, not teasing, which made an impression on me, she asked: “are all of us not important to you?”.

Is the prevailing sentiment in Poland that reading belongs to high culture – that it is a pastime of the elite?

That is all full of paradoxes. When you publish a book you dream about receiving the Nike Award, so you worry that it’s selling too well, because that in turn could means that it’s not ambitious enough (laughs). That is something I have mainly seen in Poland. It could be that is connected to the problem of low reading in our country. People simply don’t reach for a book, because they think that it is a activity reserved for the clever and the well-educated. Middlebrow literature and popular literature – books that are mainly meant to please – are seen by critics as something lesser. The situation is different in Sweden, where reading levels are very high. Swedes treat reading as equal to the cinema – as a pleasant activity to which to devote free time. Poles, by contrast, associate books not with relaxation but with effort, and critics are partly to blame for that.

Popular literature is far more varied in Sweden than it is in Poland.

Of course, but that did not come out of nowhere! After all, crime fiction is one of the most valued genres. In Swedish literature the story is very important – the narrative that the author reveals to us. Whereas in Poland language is always most important. We are without a doubt a country of great poets, we like wordplay, but we have a problem with telling stories. I think there is nothing wrong with a romance between highbrow authors and popular fiction. I would even dare say that moving between genres develops an author, as is always the case when someone has to step outside of their comfort zone and looks around. I know, however, that in Poland there are not many supporters of that approach.

Is there still a chance that we will read more?

Recent studies by the National Library show clearly that levels of reading in Poland are very low. I am little worried that we have missed the moment when reading could be made something attractive, and that it is much harder today, because books – requiring concentration, attention, and exclusive time – are not adapted to the rhythm of modern life. So it is necessary to talk lots and loudly about how great, inspiring, and close to daily life reading can be. To show examples of people for whom reading is important. Hence my idea for bukbuk, a video blog promoting reading. I founded it after I was fired from my job in television, where they didn’t want to hear about books. I thought to myself then that maybe books are indeed a dead subject. But I was tempted to find out, and bukbuk has now been going for eight months. I have been impressed by the interest with which that initiative has been received. Every day I receive proposals to review more books, and it even looks as if it might become a financially viable project. I take great pleasure in talking about books with interesting people, because I invite whoever I like to bukbuk, and do not worry about whether those people are attractive to the statistical visitor. They are often people known from different sectors. One of the most popular videos is a discussion with Magda Molek, who brought a suitcase of books for me. Or with Maks Lubienski, the cofounder of  Pożar w Burdelu. Some of the conversations have more likes, some less, but someone will always been found for whom the given topic is interesting. We have 21,000 fans already, and that number is increasing daily. I hope that reading will be like cooking. Still a few years ago no one would have said that sitting in a kitchen is an interesting pastime, and today there are masses of programmes on the subject and it is embarrassing to admit in polite company that one does not cook. I am dreaming about literary detoxes (for instance: “this month no crime novels”) and diets (“half a year of only poetry”) – that would be miracle.

Does the success of the blog translate into direct contact with readers?

Yes, in connection with the release of ” Góry Tajget” I have been travelling around Poland for book signings and meeting many people who associate me mainly with bukbuk. They are intriguing people, with specific interests. Some 85% of our visitors are women aged 25–45. They are active, and know what they want. They write to me, and share their insights, which are often very accurate. The Internet gave me access to a world inhabited by people searching for something more complex than a television broadcast.

What is fashionable in literature right now?

New fashions emerge all of the time. We had fascinating non-fiction, and now in turn book-length interviews are having their moment. Polish children’s literature is doing very well, also thanks to excellent graphic design.

And is there still space for a novel in all that?

Of course! Those are just transient fashions. The Polish market is very shallow, and when some wave comes along then no publisher can avoid it, but as such those are short-lived phenomena. The most important thing is to read – even flyers!

Anna Dziewit-Meller is an author and journalist born in Chorzow, and living in Warsaw. Her debut novel “Disko” was released in 2012 and in 2016 she published her second book, “Góra Tajget”. She is also the author of bukbuk, a blog about books.